Seabirds and Crows Gathering Mussels along the Oregon Coast

Seabirds and Crows Gathering Mussels along the Oregon Coast

New work for the months of April and May looks at seabirds, crows and my favorite stretch of the Oregon coast from Cape Arago south to Harris Beach near the California border.  My trip to the coast started with sharing a pot 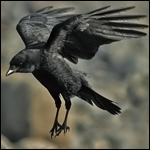 of tea with a friend in Hendricks Park.  While sitting at the picnic tables near the swing set, crows made a ruckus in the fir canopy overhead.  Soon golf ball sized tufts of moss were slowly falling around us as the birds gathered nesting material.  My first stop along the coast was to head north from Florence and visit my favorite beach on the central coast at the mouth of Bob Creek.  Again the crows were hard at work and putting on quite a show for anyone 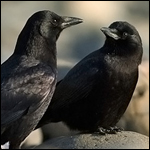 interested in watching.  At Bob Creek there are often large numbers of gulls and crows gathered to bathe in the stream or forage the rich intertidal rocks.  On this day they were gathering mussels which had been knocked from the rocks by powerful winter storm waves.   Once a mussel had been found the crow would leap into the air and fly up about 12-15 feet to drop the shell on the beach cobble below.  Usually a single drop was sufficient to crack open the mussel enough to allow them to get at the sweet orange-colored meat within.  There was no fighting amongst the crows over food, and even the seagulls were content to mind their own business.  Obviously there was plenty of food to go around.  I’ll also note that the small headland that encloses Bob Creek immediately to the north and rises some 150 feet above sea-level often has eagles roosted amongst the Sitka on 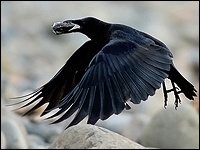 its seaward wind-swept face. From this commanding view the raptors have an excellent perch from which to launch into dives on seagull prey bathing in the creek below.   When eagles are present, there is a tension in the air, and the gulls are quick to flinch and take flight at the slightest hint of attack. 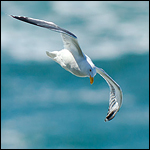 If an eagle doesn’t make contact with its intended prey on its initial attack; the seagull an agile flyer, can easily outmaneuver an eagle in a series of panicked wave- top twist and turns.  On occasion I’ve seen eagles make spectacular attempts on the gulls; but on this day there was a single red-tailed hawk being harassed by one of the crows until fed up, it moved on to perch elsewhere.  Nearby, another good bird-watching opportunity is from the spectacular Devil’s Elbow roadside pull-off. 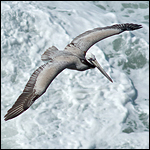 Here sea lions frolic in the surf and you can watch seabirds flying below with the unique perspective of having a dramatic back-drop of raging surf.  One example of this in my newest batch of work is of the brown pelican in flight.  In addition to a near continuous stream of seabirds on their spring migration north; there were also beautiful V-formations of Tufted Puffins that landed amongst the breakers and swell to fish the waters below the overlook.  Currently, there is a good sized colony 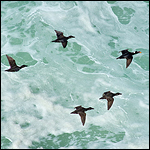 of Double-crested cormorants actively nesting on one of the large rocky outcroppings which can easily be viewed from above.  Be sure to bring a pair of binoculars if you have some!  The cormorant nests are made of seaweeds and eel-grass, and are geometrically arranged across the rocks uneven surface.  The roosting cormorants make clear their small but valuable patch of territory with exaggerated call postures which arch their long necks in graceful arcs.  All this makes for a fantastic bird-watching experience against a stunning backdrop of blue-green swells exploding into frothing surf.  This is just one facet of our magnificent Oregon Coast.  When I come here I marvel at its rugged beauty, as nice as any coastline I’ve seen in the world, and I continue to be amazed that I could be so lucky to live so close to something this wild and beautiful!