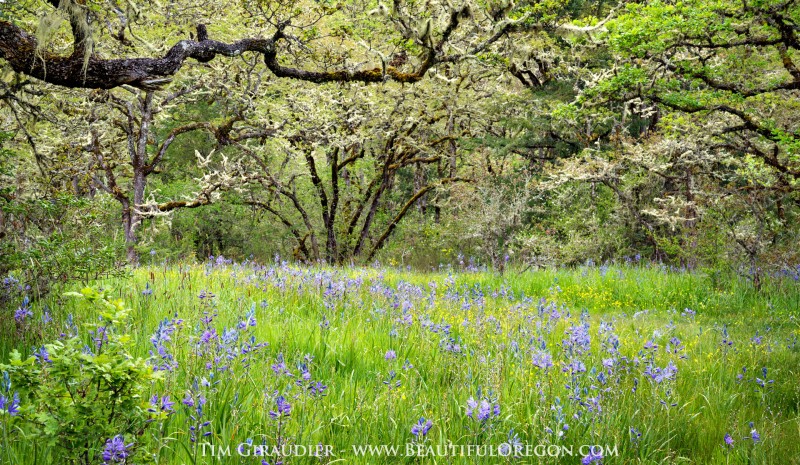 In Western Oregon, April sees the start of the grand bloom of Camas Lily; and with it comes my favorite time of year! Ranging in color from white to pale blue and deep purple, this beautiful member of the family Liliaceae  is often found growing in dense fields which create great swaths of color during the height of their spring bloom.  Occurring from sea level to 3300 meters, the Camas Lily prefers seasonally damp prairie,  grassy slopes, riparian corridors and oak savanna.  The geographic extent of the Camas Lily ranges  from  British Columbia in the north, eastward to Wyoming and Montana and south into parts of California. There are four major species of Camas Lily and ten subspecies, of which Oregon has the greatest diversity with 65% of all varieties occurring within the state.   In the Willamette Valley, there are two primary and closely related species: Common Camas (Camassia quamash) and the Great Camas (Camassia leichtlinii).   The scientific name Camassia quamash is derived from the West Coast  Native American trade language (Chinook Jargon) and was called ‘kamass’.  The first known use of this word to describe the camas lily was in 1805, and likely originated from the Nootkan word for sweet: ‘chamas’.   As a trade commodity, dried and preserved camas lily were used as a nutritious sweetener,  and throughout its range was singularly the most prized vegetable product.  In addition to human consumption, the Camas Lily is also an important food for the Camas Pocket Gopher, and in providing spring forage for deer and elk. 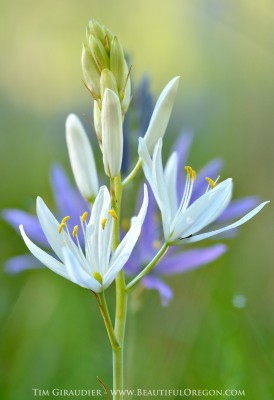 In the Willamette Valley, the Willamette Falls prevented the upstream migration of salmon, with the exception of a small number of the Spring Chinook.  As such, the Molalla and Kalapua Indians of the valleys interior had to rely more heavily on hunting and gathering.  The primary plant species that were collected were hazelnuts, tarweed, acorns and camas lily.   To promote the growth of these species the Kalapua would regularly burn the floor of the Willamette Valley so as to minimize  competing plants and create conditions which favored the Camas Lily.  Starting in early Spring, women would use digging sticks made of wood and antler to collect camas bulbs from plots that were maintained and owned by individual families.  Plots of camas were thus meticulously weeded and cared for throughout the year,  and only the largest bulbs were harvested, while smaller ones were carefully returned to the ground.  Within the plots, the harvest areas were rotated and recently dug areas were not disturbed for the next year or two.  The tastiest bulbs came in early spring from the Common Camas, which is first to bloom, and were often boiled and eaten immediately.  Bulbs harvested later in the season and into early summer, were typically cooked in earthen pits and simple stone ovens and processed in great quantities.  Roasting was often done in shallow pits where fires were made, and the coals were covered with grass.  Upon this steaming-hot vegetation the bulbs were placed in a layer and then covered with more vegetation before being tamped with earth and allowed to slowly steam for 24 to 36 hours. 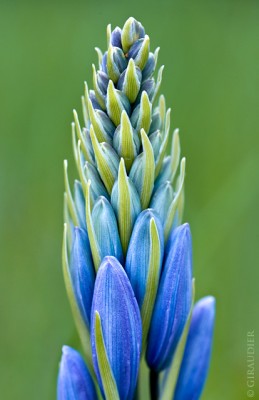 The reason for this long cooking time is that camas lily contains the complex sugar ‘inulin’ which is indigestible to humans and causes tremendous gas if eaten raw or under-cooked.  Once properly cooked, the inulin is broken down into fructose, and  the bulb becomes both sweet and digestible.  After being cooked the bulbs were eaten immediately, or were then sun-dried and pressed into easily transportable cakes which were coated with dirt and grass.  This process aided in preservation and created a valuable trade commodity, second only in value to salmon.

While the earliest evidence of human occupation of the Willamette Valley dates back to between 11,500 and 10,000 years before present (B.P.); the first known instance of bulk-processed camas lily occurs around 7750 to 6830 B.P. at the Hannavan Creek site  near present day Fern Ridge Reservoir.   Here near the Long Tom river, hundreds of intact, charcoalized camas bulbs were retrieved from the first known example of a stone hearth used to cook the bulbs.   From 6000 to 2000 B.P. the archeological record shows an increased occurrence of rock ovens and hearths used to prepare camas lily, as well as increasing numbers of the large mortars and pestles used to grind roasted camas bulbs as well as acorns and tarweed seeds.  By the arrival of the first whites in the Willamette Valley much of the valley floor had been turned into a vast human controlled ecosystem, where fire was used to  favor the camas lily and create prairie and oak savanna.  As is often the case, the natural environment that we see around us, bares little resemblance to what it looked like a scant 100 years prior; and in so much we are left unaware of what was or what has been lost. 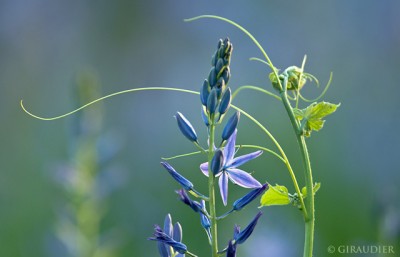 In one particularly famous description of the staggering extent and beauty of the camas fields  encountered by Lewis and Clark on their westward expedition, William Clark wrote: [ our camp is agreeable Situated in a point of timbered land on the eastern borders of an extensive leavel and butifull prarie which is intersected by Several Small branches near the bank of one of which our Camp is placed. the quawmash is now in blume at a Short distance it resembles a lake of fine clear water, So complete is this deseption that on first Sight I could have Sworn it was water.”  June 12, 1806,  Weippe Prairie, Idaho].

Some of my favorite places to view and photograph Camas Lily in our area include Mount Pisgah and the Fern Ridge National Wildlife Refuge.  So get out there and enjoy this fabulous Spring weather and visit your favorite Camas Lily prairie! 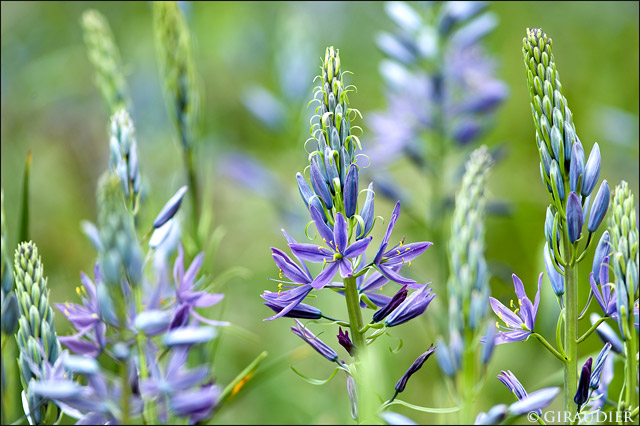 A meadow of Camas Lily sets out a profusion of blossoms at the Mount Pisgah Arboretum. Eugene-Springfield metro area in the South Willamette Valley, Oregon.